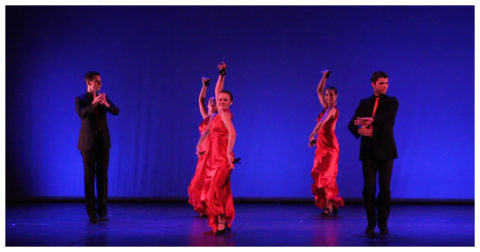 “De Ayer a Hoy” (“From Yesterday to Today”) is more than just a dance show. It is a declaration of intentions. It is our letter of presentation. This is why we put great care in every detail. Like all long-term projects, Aire Nuevo Danza had to be built on a strong foundation: we decided to call this foundation “De Ayer a Hoy”.

This show is aimed at all audiences. Both the young, and the young at heart, will be able to watch and listen from the most well-known pieces in the Spanish classical repertoire, to the fusion of styles that intend to reflect our current Spanish globalized culture.

In the first part (named “Yesterday”) we have respected academic guidelines to the fullest, performing just as the great masters and pioneers of our dance did back in their time. We have recovered the previously mentioned Bolero School, a style dating back to the 17th Century, hardly ever performed nowadays due to its technical demand, and which only a few dancers in the world can be said to master it. Of course, in this first part we will not forget other styles such as Stylized Dancing, the Jota, and –of course—the Flamenco inscribed on the list of the Intangible Cultural Heritage of Humanity in 2010.

The second part (named “Today”) depicts our special way of understanding dance and the world in general. A world where barriers are gradually disappearing and the term “crossbreeding” is acquiring a meaning far different to the one held years before, when it only alluded to the mix of ethnical groups.

Therefore, in this part, we did not hesitate to fuse together styles as different as Flamenco, Fado or Rock, leaving aside the academic guidelines, so zealously followed in “Yesterday”.

“Today” is a much more joyous and dynamic part, in which a big wave of energy fills the stage and is then passed on to the spectators.