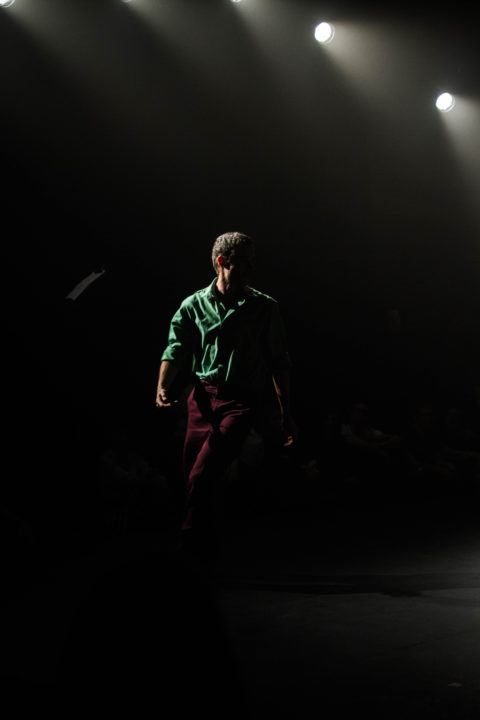 ‘Da Mopa’ is a mainly a musical project that faces the dilemma of representation as danced concert. This proposal is the natural consequence of the passage of ‘Sad Dance Therapy’ by sctages such as Monkey Week or Megatrón, spaces in which the context is quite far from the theater, the linoleum and the dance.

Electronic, latin rhythms and musical worms, between comedy, fake and dance, serve as a support to develop the themes of songs, ranging from the call to prayer to contemporary critical thinking, highlighting the contradictions of our needs, inherited or acquired.

Juan Luis Matilla recognizes in Da Mopa his musical history to give continuation to that personage naif and passionated that to show in its first solo, through the remix towards a format of concert, that will have special guests, but without leaving aside the roots of movement and dance in his speech.

Anne Bogart gathers the spirit of this show in the following quotation: “A friend of mine entertained throughout his life the fantasy of being a rock star. Fueled by his devotion to Sting, Mick Jagger and Peter Gabriel, he formed a band, practiced in a basement studio and finally rented a club in the East Village in New York. He invited me to the concert. In the club there was a lot of noise, the band was mediocre and my friend’s performance, unfortunately, was even worse. Although he performed all the movements of a rock star himself, the concert had a markedly false air. He played in front of three supporting musicians with the proper appearance of hard people, and he failed in a terrible way.”

Karaokes for intervention agreed with the public: