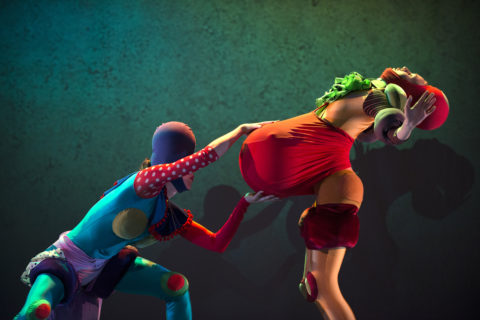 When the little butterfly girl and the firefly boy dive into their toy cube, they become magical. Their bodies are instantly transformed; their body parts split into a puzzle, and the pieces are put wrongly back together. Hands become feet, feet become hands, hands stick out from heads, and so they turn into the strangest and most astonishing creatures.

At times they are animals, at times plants, or at other times even extra-terrestrials. Sometimes they will appear to be real, and then again at other times they will appear to have popped out of a cartoon. They will jump into the sea to turn into a giant octopus or a mysterious mermaid. They will get back on land as spiders, fly into the sky in the blink of an eye and juggle with the stars. They will sleep and wake up turned into strange balls bouncing all around.

The cube transforms beings, things, and the environment and makes these assume strange, bizarre, and surrealistic dimensions, as in dreams, where things are tied together with an illogical logic and the distorted reality seems to be natural.

The choreographies reproduced by the magic of multimedia, interaction and the simultaneous play between live and deferred images enable only a few performers to play all the characters, beings, and things that appear in this play. The real as well as the virtual aspects are the result of the disorganized composition or dissection of the human body parts.

The contrast between an aesthetic proposal for the new generation and some traditional theatre dynamics, and the interaction between homemade resources and the latest technology powered by original music make Cube Tales an astonishing and impressive play. It is both moving whilst at the same time keeping the audience in constant suspense.