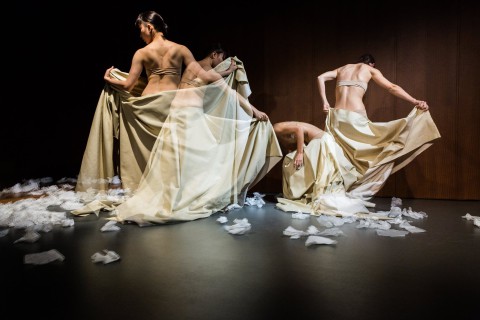 -‘Crumpled came into being as a meeting of two women (Lucía Vázquez and Saori Hala) and two cultures (Spanish and Japan). It is a delicate and intimist work, whose premiere was at the Mes de Danza Festival. Crumpled is about origami or the art of folding sheets of paper into shapes and its most poetic interpretation, female imaginary made by two voices and sound space drawn by sounds of the action – breathing, fabric rubbing, heart beating…’-
Text by Mercedes L. Caballero

It could be described as a three-dimensional work in which it is experienced with the bodies and their relationship with the fabric. It is a crumpled to throw away, a rejected idea, try not carried out and that can make you get to what you want or not.

The use of color, accent on the mass and volume, and resources of sound art, this danced performance integrate different ways of creating a living sculpture. The exchange of cultures takes us traveling to the Japanese origami paper folding referring to religious or related purposes Zen culture, and its formality, the particularity of this technique where paper is transformed into shapes of different sizes from a base initial square or rectangular. Japan back to Spain and the figure of the woman sheltered in Vejer de la Frontera and it’s history as round trip women’s clothing, through the Castilian suit coat, and Haik from Maghreb. A one-piece dress without seams.

The sound space are the details amplified with a special microphone system. Our hearts vary their tempo and combined between them as the movement develops; caresses of varying intensity, breathing, weaving on the ground, mixed with the exceptional music composed by the Hollywood Music in Media Awarded ,between other prestigious awards, Jesús Calderón, to try the dream thought.