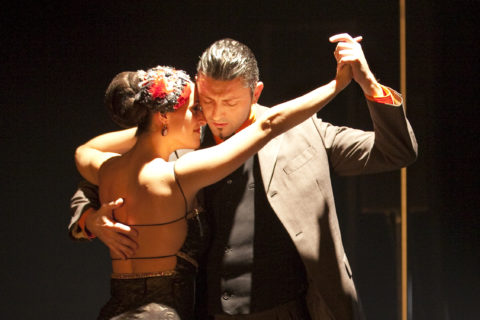 As a tango broken by lies, snapped by the artificial human relationships, emotions and feelings prefabricated by society, that’s life in a brothel in Buenos Aires at the beginning of the twentieth century.

BROKEN TANGO 2.0 springs from the purest and darkest soul of the city to eventually arrive to the latest forms of interpreting tango in the particular R.E.A Dance Company’s way. We didn’t want to get stuck to the original and traditional tango, but to show how that early twentieth century dance has continued to live by transforming itself through the movement of the bodies that inherited its language to add it new gestures over the last hundred years. Thus, throughout the show we could see the old (Gallo ciego, Amurado), new (Escualo, Michelangelo 70) and originals tangos (Contra-Bando, Duelo y Malambo).

The music is performed by a sextet (2 violins, bandoneón, piano, guitar, bass) and two singer and guitarist who interact on stage helping to recreate an emotional atmosphere in which engage the audience.

The costumes, lighting, staging and audiovisuals, as the thread of story development, have been carefully designed for the audience to experience the atmosphere and the timeless drama that feeds tango and its world.

Dancers, actors, live music (19 artist) and elaborate production, together with manage to revive the life in a brothel in Buenos Aires at the beginning of the twentieth century, showing love and loss, hope and despair, fight and surrender, passion and prostitution living together in a world where nobody finds happiness, where nobody escapes the darkness, where nobody survives the tango of the brothel, the BROKEN TANGO.