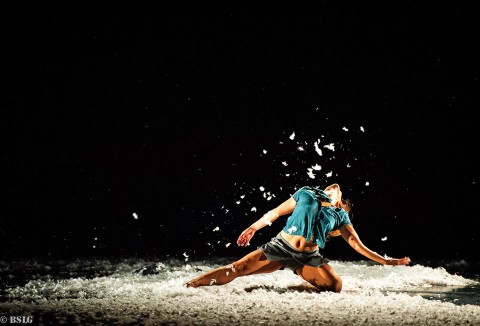 Brea y Plumas (Tar and Feathers) is a project born in 2012/13 with the investigation of a dance solo. A first work in progress in a short format, which is awarded at the First Prize Contest 2013 DeUnaPieza at Carlos III University (Madrid), is born from this first stage. From here continues its investigation during 2013-14 at Choreographers in Community in the Conde Duque Cultural Centre, in March 2014 at Creation Centre La Nave del Duende within its Artists in Residence Grant Program and in May-June 2014 at Centro de Danza Canal (Madrid). The project has also received Choreographic Production Support by Madrid Government (Comunidad de Madrid, 2014).

The project builds on the experiences during the social movements of 15M in Madrid and makes us rethink the expression “you are a chicken”. In these times of crisis we all get carried away by the flow of events. We are all responsible for what happens. Oppression, fear and manipulation are installed throughout society. In this very dark picture the possibility of finding another path to hope arises.

The choreographer engages in a solo where her mask is identified with that of a man, a dance through repressive gestures identified with patriarchy, characters like Hitler and Mussolini with his arm raised. Memories of those dictatorships of the past and present. Patriarchy was the first structure of domination and subordination of history and even today remains a basic system of domination, the most powerful and enduring inequality and the least perceived as such.

The body reflects on these times so hard and also of infinite possibilities. From here comes Brea y Plumas (Brea and Feathers), a song of hope, a reflection on the being and its complex paths, generating a change where to find and allow ourselves a space to be free.