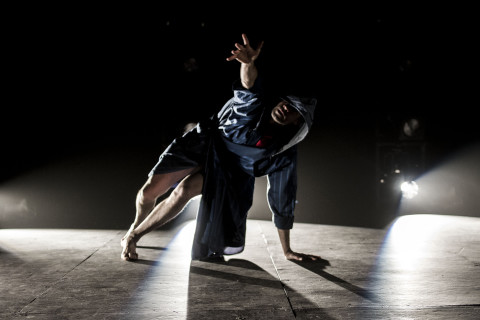 From talian Renaissance to the film “La grande belleza” there is a long way to be made. A way monopolized by a civil society cheered by the political power of one of the paradigms of neoliberal nerve, Il Cavalieri.

“Boh!” Is an Italian expression meaning “I do not know”. A dance solo choreographed and performed by Juan Luis Matilla snorkeling through classics as Palucca or Perreault creators to make ends sandwiching and dance remixing existing structures such as Josef Nadj, Martin Pisani and Thomas Hauert, without neglecting styles urban or breakdancing footwork.

The piece brings us closer to cynicism and power, to the excitement of the mass controlled from the orderly discourse from political rhetoric, economic and information to the do “not knowing”. In Boh! Matilla focuses on the roots of Italian music to compose the soundtrack to this show in which expressions, speeches and positions come to show an allegory for speaking the truth and freedom from power.

A power that is supported with the cynicism of being without being, with the glitz and collection of political, economic and media power. Il Cavalieri, intended as an example, as analysis from the purest dancística technique, somatic and vital structure that drives us to organize and determine leaders to direct our fears, our insecurities and our lives.