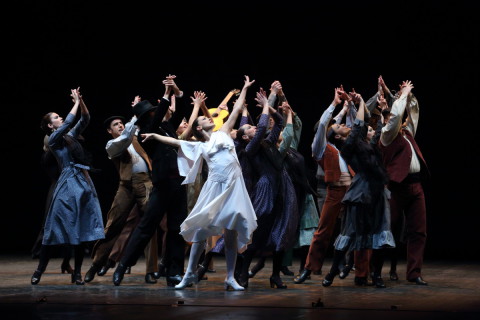 In 1974 Antonio Gades would take a huge step forward for Spanish dance with the creation of his ballet Blood Wedding, or Bodas de Sangre, based on the play by Federico García Lorca, who in turn was inspired by the news of an incident that took place in Nijar in 1928. It was adapted for ballet by Alfredo Mañas, who had already collaborated with Antonio ten years before in Don Juan.

The Company, which at that time had under twenty members, would be in charge of staging the work, and the venue chosen for the world premiere would be the Olympic Theatre in Rome, on 2 April 1974.

As regards the ballet, the dancer and choreographer said: “With Blood Wedding I wanted to pay homage to the poet, though I had to go to Rome for its premiere. I was born into a Mediterranean culture, which is a culture of jealousy, love and death that doesn’t just exist in dance, but also in literature and painting and other arts. A sense of tragedy is always present. Blood Wedding is really a Spanish story, a tragedy imbued with folklore. I’ve always been interested in Lorca’s work, mainly because it describes the density and intentions of the Andalusian people in depth.”

Antonio referred to one of the most exciting scenes in the ballet, the fight at the end between Leonardo and the Groom, which in a way sums up his attitude to creativity and performance in his art: “That fight is the most difficult thing I’ve done in my whole life. I expect a lot of myself, I expect everything. I want to synthesise that pain, dance like a man that is going to die and is meeting his death with austerity, without becoming frantic or making a spectacle.”

Six years after the ballet was first performed in the world’s most important theatres, Antonio Gades and Carlos Saura made a film version of the ballet, which was the start of a successful combination of dance and film that has made this duo one of the greatest influences in spreading the flamenco art in the entire world.

Blood Wedding has been staged by a great variety of dance companies, including the National Ballet of Spain, the National Ballet of Cuba, the Ballet of Nancy, the Rome Opera and the Andalusian Dance Company. Now the Antonio Gades Company once again stages what is one of the greatest Spanish works of dramatic dance, at the forefront of the 20th century and a classic of contemporary dance.

The dances with which Antonio Gades began his solo career in about 1963 were gradually shaped into the numbers that would become the Flamenco Suite five years later, eight pieces of traditional flamenco dance presented from Gades’ own angle. This Suite was performed by his company, including, among others, Cristina Hoyos, his dance partner for more than twenty years, who in turn had replaced Curra Jiménez, Antonio’s partner in the early years.

This Suite was performed by his company as the second part of a “Spanish suite” in which they dance the Jota, the Vito, the death of Don Juan, the Zapateado de Sarasate, and other numbers that the Foundation intends to “reconstruct” and stage in the coming years.

The Flamenco Suite is a series of numbers that offer a surprising take on the aesthetics of flamenco dance, with solos, duets and group dances, all the sides of flamenco dance as seen from Antonio Gades’ own perspective. It is an excellent chance to see a way of dancing flamenco that is no longer used, which was described in his day as avant-garde and considered a classic.

Premiere: Rome, Olympic Theatre, 1974
Duration: 35 minutes without an interval
Revival by the Antonio Gades Company in Verona on July 26, 2006.