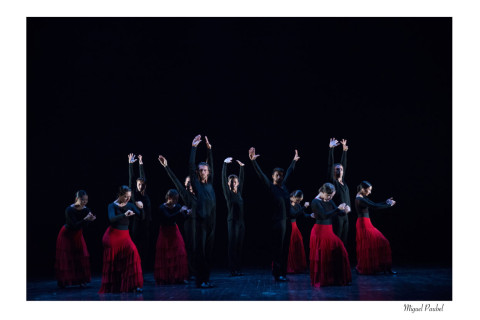 Created to 14 dancers (but open to negotiate a possible reduction of the cast, for space requirements or production).

After our first show “de Sagre y RAZA”, with which we were awarded in the XXIII Contest of Spanish Dance and Flamenco de Madrid (single prize of group choreography awarded this year, Award for Best Costume Design, Flamenco Vivo Award Carlota Santana New York, Maria de Avila Award CSDM), the Centro de Danza del Canal in Madrid, has chosen our company, granting the temporary residence and selecting us to make a premiere of our second show “ARAT; from Fellah-Mangu to Flamenco” in the Sala Negra, part of los Teatros del Canal on September 15, 2015 .

Our desire with “ARAT” is to show the evolution of flamenco from its roots, from his first origin in Arab and going through some of the greatest artists that flamenco dance has given us, showing the evolution in steps and style, to end in a modern Flamenco that show the movements, feelings and choreography that give the stamp to the creations of our choreographer Juan Manuel Prieto and with the modern and