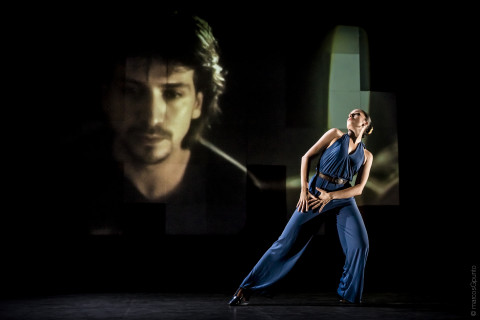 #am@r (#l@ve) is a show of Spanish Dance and Video Dance talking about love and loneliness through new technologies.
Esther and Javier are two lifelong friends that communicate to each other through telephone chat. He has just broken up with his girlfriend and she has no relationship for a long time. Without telling to each other, they decide to register under a false name in eDarling with the aim of finding their ideal partner there. This circumstance gives rise to a series of tangles, where what the characters live in the real world has nothing to do with what they share in the virtual world.

After the success obtained with the piece Tú (You), a play about the dream love and which premiered in June 2013 at the Auditorium of Huesca, the company Rajatabla Danza decided to continue investigating around the same theme, but this time from a different perspective. Esther Tablas and Javier Sánchez have made a thorough study about love and the role that new technologies play in terms of human relations, and more particularly from the perspective of relationships.
New technologies have changed the way we communicate. On the one hand, they approach us to people who are far away, but on the other hand, they often isolate us from those who are closest.
New technologies as communication platforms are reflected not only in the plot of the play, but also in its staging. Live and video dance are combined on stage with a pixelated screen as a metaphor.
#am@r (#l@ve) is a beautiful work of Spanish dance that aims to bring the choreographic language to the audience through a current theme, in which the public will feel perfectly identified with the characters and the situations they live.
#am@r (#l@ve) is a proposal for all audiences. It is a show that combines the contemporary language of Spanish dance, on an emotional journey that leads the audience from the joy of folklore to the emotion of flamenco, with scenes of great theatricality and drama, all to the rhythm of sounds and melodies of mobile phones.

Rajatabla Danza is Esther Tablas’s creational platform. Esther Tablas is a choreographer and dancer in constant search of a unique language combining the traditional character of Spanish dance with her possibilities of creative change. Esther Tablas aims for a versatile dance where the performer is an all-embracing artist. Music, images, light and movement should all go hand in hand to express and thrill. The creator constantly researches about choreographic facts to such an extent that every new performance is an artistic and technical challenge for ...
+ info