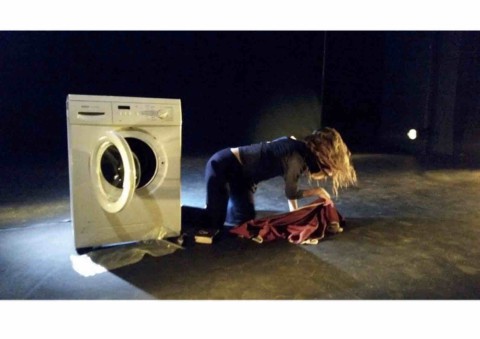 Dulcinea of Toboso as a driving force behind the heroic deeds of Don Quixote? Sane be the crazy one and crazy bethe sane one. What became of her? Where are the knights errant? How does she manage to survive in oblivion? Through the texts by Cervantes, dance, music, through establishing an emotional journey from abandonment to heroism (and vice versa), and dealing with the historical from a perspective of being and feeling contemporary.

“…ye, whoever ye are, help me confess my misfortune or, at least, be not weary of listening to it…the soul of the knight errant was: Dulcinea of Toboso…”

We gather that Don Quixote did not believe Dulcinea to be real, but that he imagined her to be and made her real before the world with the sheer power of his consciousness.  For Dulcinea is as a great human conception only a means to reach dignity.  Man has a right to create his own life, his daily feats, not by conforming to the events as they unfold, see things as they are, and not how they are said to be… So see in Aldonza a princess and in the rams, enemy troops. But where are the knights errant?

And that is how we find ourselves before an atemporalDulcinea surviving the present and trying to forget her glorious past. But the anxiety of living forever is stronger and the desire to fight for ideals becomes as valid in these times as it was before. –…”Don Quixote of la Mancha, mirror of the world in which one can see all the brave people in the world…”-

The Don Quixotes of our days wake up to conquer new adventures.

Paula Quintana PaulaQuintana Actress, dancer, creator. -She couples her work for companies with her career as a creator based on visceral communication, as one person with feelings to another. Substance and form constitute one sole element through which her own language is generated composed by differents styles with add up a lot of virtues and complete each other’s shortcomings with no intension to merge but only to complement each other.- -Received a Special Award as best emerging artist/creator ”for the maturity shown in integrating dance and theatre, with great purity and potential for projection”, Feria UmoreAzoka 2015, Leioa,Vizcaya. Born in Tenerife, ...
+ info