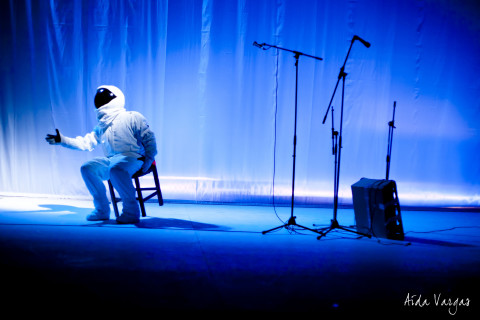 A flamenco singer in the emptiness. Space to moderate and take root. Using the historical singing standards of flamenco as a reference and drawing on abstraction and repetition as creative tools, the dancer and choreographer Juan Carlos Lérida, together with flamenco singer Niño de Elche, are breaking down dance and song into it basic components. Bodies that move closer together through various “Tableau vivant” originating from those who sing, those who listen or from anyone who wishes. Following the sample “Al Toque” (To theGuitar) released in Vienna 2011, “Al Cante” (To the Song) is the second instalment of this trilogy dedicated to the expressive foundations of Flamenco.

The work of Lérida is both a story and an act: a testimony of the process and of the research on a certain subject, and an artistic act shared with the public. This methodology, which he has continually reworked along his journey, can be distinguished in the recent works of the last few years: a three-piece work revolving around the three basic components of Flamenco language – guitar, song and dance. Lérida’s early productions focussed on the toque (the guitar) from different approaches and resulted in a show. Following his first set of productions that focussed on the toque (the guitar) exploring it from different approaches, Lérida has been developing the second part of this three-piece work since early 2012, this time focus is on the cante (the song). Each approach is therefore not only an artistic act in itself but also a reflection of a process. It is a way of sharing material with spectators who are distant from both the final show and the work in progress. Lérida takes to the stage (that’s to say the moon) with Niño de Elche, a Flamenco singer who by mixing knowledge and artistic curiosity, is making the languages of the flamenco grow, and David Montero, actor, writer and director who for years has been developing a fruitful dialogue with flamenco. All three from their unique perspectives and with the common background of the two previous approaches, move closer to that “thing”–the flamenco song–which, as a subject, is strictly physical. They are simultaneously conversing with the image (the real and the mythical) that flamenco has generated in its almost two centuries of life to offer an unpublished piece in every sense: something new (never seen before) that takes form as the spectator receives it, enlightening unseen places, combining risk and rigor.  David Montero

JUAN CARLOS LERIDA. www.juancarloslerida.com Dancer, choreographer and instructor of Flamenco, Juan Carlos Lerida is licensed in Choreography and Techniques of Interpretation from the Institut de Teatre of Barcelona where he graduated with the “Premio extraordinario” in 2007. He is currently completing a Doctorate at the University of Seville where is conducting advanced interdisciplinary studies on Flamenco. He began studying flamenco at the age of 3 in Seville. He later expanded his studies of Dramatic Arts and Contemporary Dance at the C.A.T in Seville and later studies Dance ...
+ info