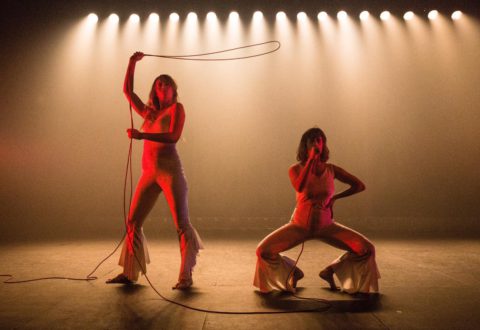 “A muerte”, “To death”, spanish expression that means to do something as if your life depends on it.

“A muerte” as a motto, “A muerte “as a way of life. This is what we consider a show must be , like this it must be represented.

Facing this cruel world we only had one solution: Killing the Hermanas Gestring. Excited and almost posessed pronounciating the words ”to death ” we kill the Hermanas Gestring with a clear purpose, a face to face with Hades. For that we had an hard and stimulating journey forced to cheat the Goalkeeper, wandering during years on Asphodelos, pretending to be of royal blood to stay on the Elysian Fields until our mermaid skin would vanish to show the claws of the Keres and to be able to cross the river of fire and show Hades who is in command from now on. We went all along with death and made it ours ,the undergorund world was governed by us, the daugthers of the night thirsty of human blood.

We carry in the blood the irony of humanity,

we are daughters of the 21st century,

we are the result of all the previous trash.

With mockery and cockiness we introduce ourselves, we do not know how to act otherwise.

THANKS TO: Tanzhaus- Zurich and L’estruch, Fábrica de creación en Sabadell. This project was made thanks to crowdfunding.

"Daughters of a bearded woman and an elephant dwarf decided to become sisters by a pact of navels" Laura Morales and Greta Garcia, decide to join in 2013 and bet on new paths for creation. For this they configure two characters: Aletra and Virtue, able to adapt to what is immediately available. In a natural way, video-creation becomes its tool, through Youtube and even WhatsApp, and collaborating with other artists for the creation of short films and video clips. Thus gave way to the performance, creating works for art galleries and spaces, ...
+ info